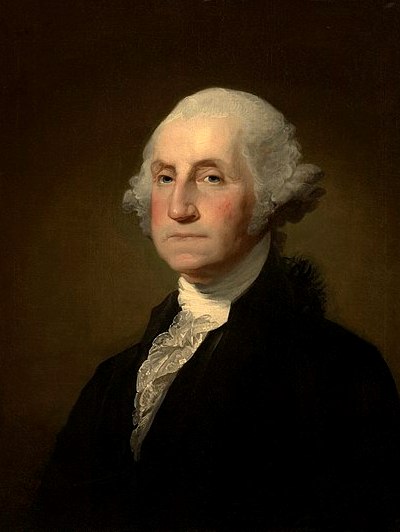 George Washington (February 22, 1732 - December 14, 1799) was an American political leader, military general, statesman, and Founding Father who served as the first president of the United States from 1789 to 1797. Previously, he led Patriot forces to victory in the nation's War for Independence. He presided at the Constitutional Convention of 1787, which established the U.S. Constitution and a federal government. Washington has been called the "Father of His Country" for his manifold leadership in the formative days of the new nation.
Washington received his initial military training and command with the Virginia Regiment during the French and Indian War. He was later elected to the Virginia House of Burgesses and was named a delegate to the Continental Congress, where he was appointed Commanding General of the Continental Army. He commanded American forces, allied with France, in the defeat and surrender of the British during the Siege of Yorktown. He resigned his commission after the Treaty of Paris in 1783.
Washington played a key role in adopting and ratifying the Constitution and was then twice elected president by the Electoral College. He implemented a strong, well-financed national government while remaining impartial in a fierce rivalry between cabinet members Thomas Jefferson and Alexander Hamilton. ... read more on
(Note: This article uses material from the Wikipedia article "George_Washington", which is released under the  Creative Commons Attribution-Share-Alike License 3.0.)
Comments on President George Washington