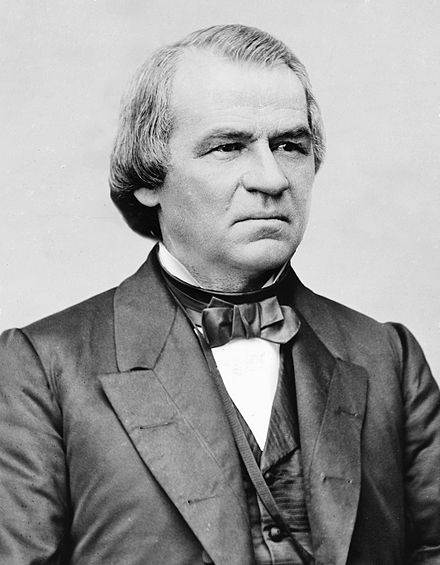 Andrew Johnson (December 29, 1808 - July 31, 1875) was the 17th president of the United States, serving from 1865 to 1869. He assumed the presidency as he was vice president at the time of the assassination of Abraham Lincoln. Johnson was a Democrat who ran with Lincoln on the National Union ticket, coming to office as the Civil War concluded. He favored quick restoration of the seceded states to the Union without protection for the former slaves. This led to conflict with the Republican-dominated Congress, culminating in his impeachment by the House of Representatives in 1868. He was acquitted in the Senate by one vote. His main accomplishment as president was the Alaska purchase.
Johnson was born in poverty in Raleigh, North Carolina, and never attended school. He was apprenticed as a tailor and worked in several frontier towns before settling in Greeneville, Tennessee. He served as alderman and mayor there before being elected to the Tennessee House of Representatives in 1835. After brief service in the Tennessee Senate, Johnson was elected to the House of Representatives in 1843, where he served five two-year terms. He became governor of Tennessee for four years, and was elected by the legislature to the Senate in 1857. ... read more on
(Note: This article uses material from the Wikipedia article "Andrew_Johnson", which is released under the  Creative Commons Attribution-Share-Alike License 3.0.)
Comments on President Andrew Johnson