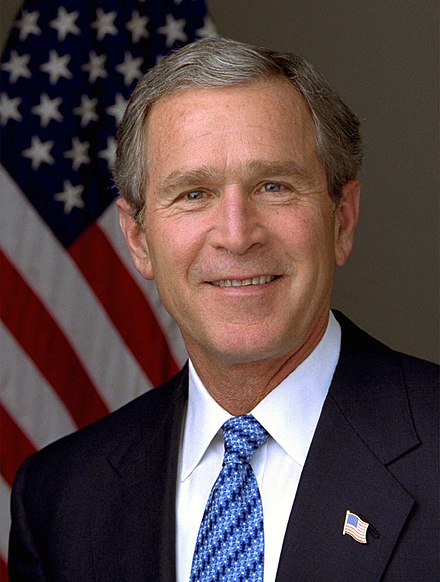 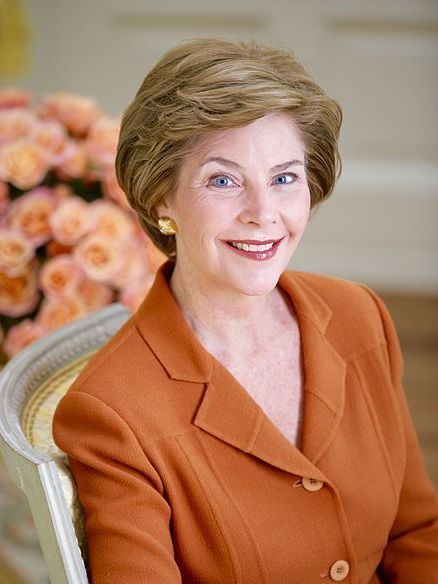 face living First Lady
George Walker Bush (born July 6, 1946) is an American politician and businessman who served as the 43rd president of the United States from 2001 to 2009. A member of the Republican Party, he had previously served as the 46th governor of Texas from 1995 to 2000. Born into the Bush family, his father, George H. W. Bush, served as the 41st president of the United States from 1989 to 1993.
Bush is the eldest son of Barbara and George H. W. Bush. As such he is the second son of a former United States president to himself become the American president, with the first being John Quincy Adams. He flew warplanes in the Texas and Alabama Air National Guard. After graduating from Yale College in 1968 and Harvard Business School in 1975, he worked in the oil industry. Bush married Laura Welch in 1977 and unsuccessfully ran for the U.S. House of Representatives shortly thereafter. He later co-owned the Texas Rangers baseball team before defeating Ann Richards in the 1994 Texas gubernatorial election. As governor, Bush successfully sponsored legislation for tort reform, increased education funding, set higher standards for schools, and reformed the criminal justice system. Bush also helped make Texas the leading producer of wind powered electricity in the United States. Bush was elected president of the United States in 2000 when he defeated Democratic incumbent Vice President Al Gore after a narrow and contested win that involved a Supreme Court decision to stop a recount in Florida. He became the fourth person to be elected president without a popular vote victory. ... read more on
(Note: This article uses material from the Wikipedia article "George_Bush", which is released under the  Creative Commons Attribution-Share-Alike License 3.0.)
Comments on President George W. Bush